The objective of REAPower is to prove the concept of electricity production through Salinity Gradient Power- Reverse Electrodialysis (SGP-RE) using brine and sea or brackish water and to develop the necessary materials, components and processes.

The SGP-RE is a clean, renewable energy with large global potential since the electricity is produced simply from supplies of water with different salt concentrations.

The Blue Energy initiative (reverse electrodialysis using seawater and freshwater) is working intensively on the development of the reverse electrodialysis concept aiming at its commercialisation. This concept is a very promising process expected to deliver electricity at cost similar to wind power. The main limitation though of the combination of seawater and freshwater, as identified by several researchers, is the low conductivity of the compartments in the SGP-RE stack holding the fresh water. To deal with the existing limitations, REAPower uses seawater as the low concentration solution and brine as the high concentration

Theoretical calculations, assuming similar conditions to the salt pond where the first RE stack for brine and seawater reverse electrodialysis will be installed, show that the theoretical osmotic energy content of 18,8 MJ/m3 of brine could result in a power output of 450 kWe generating electricity at very attractive cost as illustrated in the following (arbitrary) example. 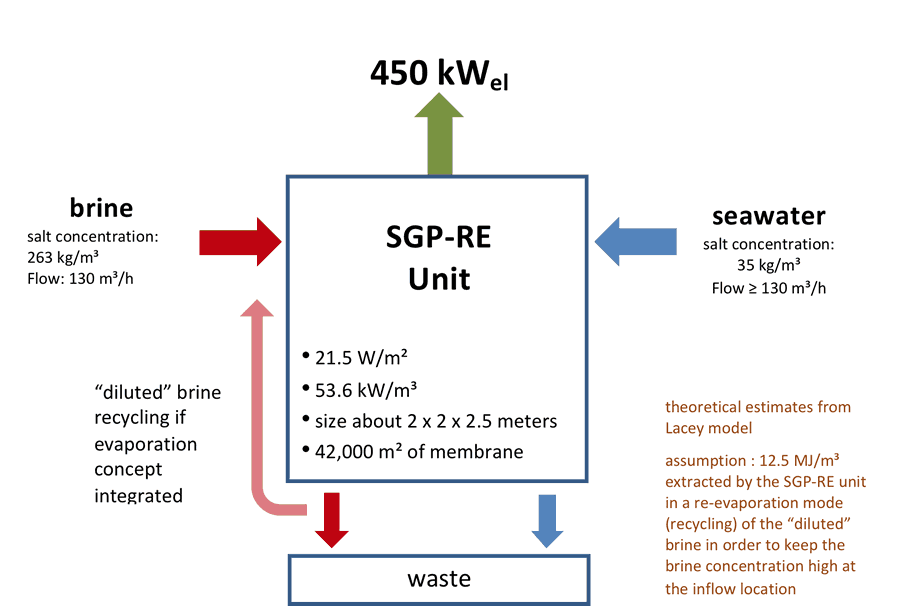